Animals with inflated egos are rapidly taking the reins of the internet and steering it in a direction many find unnerving. That's why Addman at Muppets for Justice and I decided to scrutinize these egotistical and vain animals, taking them down a peg in hopes of somehow rescuing the internet before irreversible damage befalls it. None of the previous statements are true; we just thought it'd be funny. Source
Addman:  I wonder how many bones you have to own to be considered this "high-society" in the dog world.
Chiz: I don't know, but I feel that smug pugs like this one are quite repugnant.
Chiz: Not that he doesn't wear this Puggy Ellis pugsedo with the right amount of flair, but put that tongue away. It's incredibly distasteful.
Addman: How did he earn enough money to afford that tux? Certainly not from a modeling contract.
Addman: In social terms, he has the earth-worn look of a coal miner that has been involved in an unfortunate chip pan fire.

Chiz: Simply put, he's a slobbering mess, and look at those grotesque miniature thumbs.
Chiz: Something tells me he loss half his thumbs as the result of some bad luck at a poker match.
Addman: That thought is almost as horrible as those loosely fitted sleeves. If you ain't gonna get yo' tux tailored, then don't bother bro!
Chiz: Someone's been shy about hitting the gym.
Chiz: With a saggy, weathered face like that, who can blame him?
Addman: Indeed. His jowly chops suggest that he's a stranger to the term "walkies". No wonder he's wearing such a baggy tux. He's trying to cover up his unsightly physique.
Chiz: His cookie intake has been a cause for concern when it comes to his dogabetus.

Source
Addman: Putting the clothes aside for a moment, does this monkey have a mullet?
Chiz: Monkey? I thought it was Garth Algar from Wayne's World.
Addman: I'm going to set up a charity for monkeys with poor hairstyling choices. Monkeys With Mullets. This picture will be on the campaign posters, to show how monkeys are forced to look in Lithuania.
Chiz: As long as you have Sarah McLachlan onboard, you should have no problem spreading the word.
Addman: "Please help poor Mojo. With your donations we can send out a barber to snip off his radioactive barnet and dye his coat a more fashionable shade of mauve"
Chiz: I can see the monkey's jumping on the meme-based McKayla Maroney bandwagon with that disappointed sideways grin.
Addman: To be fair, I would be "not impressed" if I was dressed like that.
Chiz: Is that a vest beneath a vest I see?
Chiz: I think she should look into in-vest-igating alternative wardrobe choices
Addman: Double vested? I think she's been har-vest-ing the bargain bins at the mall.
Addman: She should in-vest in more practical clothes.
Addman: Such as a pair of shoes that don't let wet in. As soon as that monkey steps in a puddle, those knitted monstrosities are going to absorb water faster than Usain Bolt on laxatives.
Chiz: They're going to take on more water than Leonardo DeCaprio in Titantic.
Addman: They'll be damper than the floor in front of a Taylor Lautner poster at a nunnery.
Chiz: They'll be soggier than the Golden Girls at a screening of Magic Mike.
Addman: They'll be wetter than a marine biologist’s handshake.

Source
Addman: "At least, my dream of starring in The Lion King can finally come to fruition"
Chiz: He looks like he's about to hit up the club and order a glass of Pride on the Rocks.
Addman: I bet the Lithuanian monkey from the last picture was present at his birth. He split a mango and rubbed it into the cat's forehead.
Chiz: They both probably starred in the B-movie The Lion King of Swag.
Chiz: YOLNT—You Only Live Nine Times
Addman: That's probably emblazoned onto the back of his coat. Although, I think the last time I saw a parka like this, Liam Gallagher was wearing it.
Addman: A cat who steals a parka from Liam Gallagher is a brave cat, regardless of how many lives he leads
Chiz: He has the thousand-mile stare like Liam. Perhaps he won it in a staring contest.
Addman: Chiz, I've got it! This is Liam's cat! The official Oasis mascot!
Addman: He's always fighting with other members of his litter, and tried to start a fight with Damon Albarn's dog.
Chiz: He's definitely been hitting the catnip like a rockstar, that's easy to say.

Casper a.k.a. The Ferret with Merit

Source
Chiz: This would be Eminem if he were an Animorph.
Addman: Excellent. His first single would be "Without Fleas".
Addman: "Forgot about Dry Mix?"
Chiz: "Rodent's Beat Tape"
Addman: I wonder if there's an Animorph of Bruno we can gently lower onto his face for publicity?
Chiz: It'd probably be a naked mole rat dressed in pigeon feathers.
Addman: *sigh* if only there were more award ceremonies where it's appropriate to dangle a naked mole rat onto a ferret.
Addman: I'm sure David Attenborough would attend.
Chiz: I can picture David Attenborough slithering between the seats and whispering random ferret facts into celebrities’ ears.
Chiz: Actually, The Bora Tehara Awards in Toklau recently featured a duck tap dancing with a bi-polar polar bear this past month. I'm sure they'll accommodate this act next year... If only they weren't so opposed to hoodies.
Addman: Holy hell Chiz, I think you're going crazy. Don't Lose Yourself!
Addman: Getting back on topic, I'd love to see this little guy rolling down the street, nibbling bitches on the mean streets of Detroit.
Addman: Packing a pistol in his little cheeks. 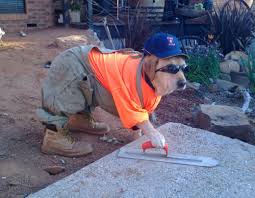 Source
Chiz: "I'm in the ruffing business, but I'm no stranger to laying asphalt."
Addman: People who are against bringing pets to work should see this picture. This dog's handiwork is not half bad.
Chiz: He's not afraid to get his paws dirty.
Chiz: It only stands to reason that a foreman with four legs will be better than one that only has two.
Addman: I'd trust him to do a full renovation on my house. I'd have no bones about it.
Chiz: Not only that, but he looks rather fetching in that attire.
Addman: Indeed. I think dogs should be hired for all construction jobs. Mainly because you can't see their arse-crack poking over their jeans at all times.
Addman: Plus, it doesn't matter if they get killed because they don't have souls.
Chiz: Also, there won't be much hostility at the work place since most of them are all bark and no bite.
Chiz: Though all that ass sniffing could ring up a few sexual harassment lawsuits.
Addman: What do you mean? Men on construction sites inhale each other's anal fumes all the time. That's why they're always hanging out; easy ventilation.
Chiz: Yeah, but it's rare that they dump their feces in the middle of the shop floor and proceed to eat it.
Addman: I'll admit I've never seen that, but builders tend to make me rather uncomfortable. I just give them a cup of tea and leave them to it.
Addman: It's a little threatening to have a guy with forearms the size of tree trunks come into your home and list everything that's wrong, then take your money.
Addman: That's why a dog builder would be perfect!
Chiz: Well, the builders around my parts don't speak English, so I don't have to worry about the socializing aspect. Though I suppose I won't have that issue with dogs either.
Addman: We're missing a golden opportunity here. We should start a company of dog builders!
Addman: "If your wood is strained, in your roof rafters, who you gonna call? DOG BUILDERS!"
Chiz: "If there's a clog in your drain lines, look no further than our canines!"
Addman: "Bow-wow, bow-wow, bow-wow, bow-wow-wow-wowowow, we ain't 'fraid of no quotes!"
Chiz: "If the job requires opposable thumbs, you should get a human to do the work!"
Chiz: "If there's a splinter in your arc, bark bark bark bark bark!"
Chiz: "Something something roof, something something woof!"
Addman: "Don't cross the leads" *explosion*
Chiz: “Don't forget to fasten your safety goggles" *explosion*

Chiz
My name isn't really Chiz, but I know you don't care. Other than that, you can learn more about me by reading my shit.